The Open Rehearsal with Yannick Nézet-Séguin conducting the Codarts Symphony Orchestra in the Grote Zaal was a great success yesterday, 20 October. With a good sized audience there, the session had a real sense of occasion and the orchestra really responded to Yannick’s amazing direction. He rehearsed the work for over two hours and then followed this with a play-through. This was another sign of the close working relationship between Codarts Classical Music and the Rotterdam Philharmonic. Thanks to Yannick for offering his time so generously. 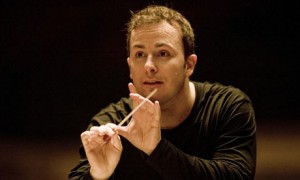 I attended the RPhO’s concert on Thursday night in which Yannick conducted a lovely performance the Siegfried Idyll followed by the Four Last Songs of Strauss (beautifully sung by Dorothea Röschmann) and Brahms’ Third Symphony. The concert celebrated the 40 years of principal horn playing of Martin van de Merwe who finished the evening with a touching account of the Mondschein-Musik from Strauss’ Capriccio. Martin and former principal horn Bob Stoel are our horn teachers in Codarts and are two of many RPhO members doing a great job with our students.

Friday saw the Codarts Symphony Orchestra playing to a large audience in the Grote Zaal for the lunchtime ‘snapshot’ concert in which Ineke Hellingman gave a brilliant account of the Mendelssohn D minor concerto followed by Hans Leenders’ beautifully judged Sibelius Second Symphony in preparation for the Yannick Nézet-Séguin Open Rehearsal. A large audience of at least 1000 was there to support us.