On 1 December my second concert as President of Oxford Chamber Music Society featured my old friend Nick Daniel playing oboe quartets with his Britten Oboe Quartet colleagues, Jacqueline Shave (violin), Caroline Dearnley (viola) and Clare Finnimore (cello). The concert was a real treat with great performances of Oliver Knussen’s Cantata and Elizabeth Lutyens’ Driving Out the Death. Nick’s beautiful oboe playing throughout was matched by his cor anglais playing Mozart’s Ave Verum Corpus. The concert began with Moeran’s Oboe Phantasy, a favourite of ours and of course they ended with the great Mozart F major Quartet – a masterful account by Nick and colleagues. Nick is so good at introducing his concerts – informative, witty and really communicating with his audience. Afterwards and wanting to catch up with Nick and his family,  there seemed to be only one thing to do on a Sunday late afternoon in Oxford – tea at the Randolph Hotel! 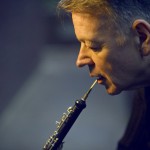