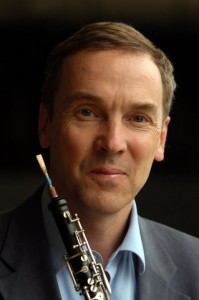 Teaching has been an important part of my life for over 45 years. I was privileged to receive wonderful oboe teaching from Janet Craxton, Neil Black, Evelyn Barbirolli, Helmut Winschermann and occasionally from Léon Goossens, and have always sought to pass on what I have learned to others.

I feel very much a part of the English ‘school’ of oboe playing and teaching which owes much to the inspirational playing of Léon Goossens as well as to leading player/teachers including  my own teachers as well as Terence McDonagh, Michael Winfield, Sarah Francis and many other outstanding oboists.

But I have absorbed much from other schools of oboe playing notably through my lessons with Helmut Winschermann in Detmold, Germany and through my admiration for the teaching in Paris and Lyons, in Canada/USA, and in many conservatoires throughout Europe, Asia, South America and Australia. As a member of both the International Double Reed Society and British Double Reed Society, I keep in touch with new ideas and approaches as much as I can.

Beginning as a private teacher, I was appointed to the Royal Academy of Music in 1984 to succeed Michael Dobson and taught there with my colleagues Celia Nicklin and Tess Miller until 1993 when I began teaching at Royal Birmingham Conservatoire along with Richard Weigall, Antony Miller, Jane Marshall, Jenni Phillips, Jonathan Kelly, Christopher Cowie, Anna Cooper, Sophia McKenna, Gail Hennessy and the whole oboe team. I continue to teach the oboe at Royal Birmingham Conservatoire. During my time as Artistic Director at Codarts Rotterdam (2011 – 2016) the oboe teachers were Maarten Dekkers, Aisling Casey and Ralph van Daal. Currently I am working at the Royal Welsh College of Music where the oboe teachers are John Anderson, Murray Johnston, Catriona MacKinnon and Sarah-Jayne Porsmoguer.

As a chamber music and orchestra coach, I draw on my many years of playing with outstanding players of all instruments. The art of ensemble playing is perhaps the most rewarding teaching of all as technique, musicianship and imagination are stretched to the limit.

I have been honoured to work with so many talented students over the years and enjoyed watching the progress of their careers in performing, in teaching and in all areas of the music profession. I try to keep in touch with as many former students as I can wherever they are –  in the UK, Canada/USA, Australia, Hong Kong and China and many European countries.