The Webinar on 20 July, A Tribute to Telemann’s Fantasias for Flute, has proved to be a real success with a great many people taking part, showing interest and writing in. Thank you so much for your involvement and thanks especially go to panelists Alfredo Bernardini, Rachel Brown, Nicholas Daniel and Paul Edmund-Davies for their wonderful contributions. Many participants commented on their performances and there was an apprecaition of the diversity of approaches. We were able to play movements from all 12 of the Fantasias and were lucky, too, to be able to play two movements of Fantasia V played by the baroque oboist Antoine Torunczyk and the second movement of Fantasia IV played by recorder player Aldo Abreu. Thanks are due to Antoine and Aldo for letting us use their recordings.

The Webinar was accompanied by links to the panelists’ recordings and to published work on the Fantasias. My article is available on this website and this gives a full range of references. It is hoped that anyone wanting to continue research on these great works can use this material as a starting point. In the meantime, further discussions can be continued via this website’s e mail address: george@georgecaird.co.uk I am already connecting messages and enquiries to the panelists and other experts.

Finally, thanks are due to Steven Zohn for his support, to Jeremy Polmear (Oboe Classics) for encouraging this event, and to Stephen Powell, Kara Davies-Hobbs and Lizzie Caird for their technical support.  I am now being encouraged to run more webinars so will hope to be in touch with you all again soon. 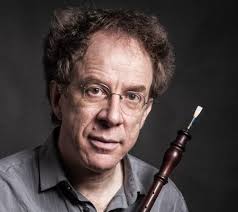