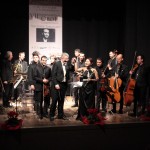 It was an honour to be asked to join the jury for the VII Tomassini International Oboe Competition in Petritoli, Italy from 30 November to 3 December. The jury were: Thomas Indermuhle (Chair), Jean-Louis Capezzali, George Caird, Marco Salvatori and Daniele Giulio Moles. There was an exceptionally high level amongst the contestants and after two rounds which included performances of Bach’s G Minor Sonata, Schumann’s Romances, the Strauss Concerto and Berio’s Sequenza VII, six wonderful oboists emerged for the final round: Ayaka Nishino (Japan), Ilyes Boufadden-Adlos (France), Seulgi Kim (South Korea), Mariano Barco Esteban (Spain), Camille Giraudo (France) and Auli Morales Natalia (Spain). In the end, Seulgi Kim emerged as the winner with a scintillating performance of Mozart’s C major Concerto with Mariano Esteban second and Ayaka Nishino, third.

it was a pleasure, too, to take part in the Jury concert on 2 December in which I played Finzi’s Interlude with pianist Valeria Picardi. Thomas Indermuhle performed CPE Bach’s G minor Sonata with pianist Silvia Ciammaglichella and A. Nishimura’s Karura and Jean-Louis Capezzali played the lyrical Pixis Grand Sonate and Songs Without Words by Mendelssohn arranged by David Walter.

It was a great visit to Petritoli and a fine festival of oboe playing commemorating the great Italian oboist Giuseppe Tomassini. Congratulations to the amazing Lorenzo Luciani, Director extraordinary! And thanks to Marco who drove me to and from Ancona airport at unsocial hours!!

END_OF_DOCUMENT_TOKEN_TO_BE_REPLACED

This site uses Akismet to reduce spam. Learn how your comment data is processed.